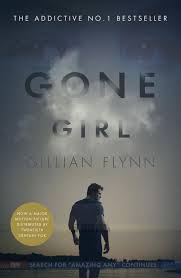 Wow, this is a book. A really good book with a unique story. One that makes you want to read the end to find out what’s happening when you’re only a few chapters in, because you can’t believe what’s unfolding. Fend off all thoughts of doing any internet searches, because spoilers are called that for a reason!

Gone Girl, published in 2012, is a beautifully written, engrossing, eye-popping account of a married couple who have lost touch with each other. Definitely aimed at the 25-40 year old market (I think), it’s the story of Amy, whose parents wrote a series of children’s books about her when she was small, called Amazing Amy. Amy still thinks she’s pretty darn amazing, even if the books are dated, and that sense of importance has carried her along in life … the constant need to be number one.

When she finds out she and Nick are just going though the motions, she turns … ahhh … ummm … well … mental. She’s a conniving, deceitful train-wreck of a human being, but as the author Gillian Flynn said, in regards to Nick she’s no longer trying to win any popularity contests. She wants revenge.

Every year on their anniversary, Amy puts together a cryptic treasure hunt for Nick highlighting the things that have happened to them during the year. Nick always feels like it’s a test, because he doesn’t remember (or dwell on) every detail the way Amy does. On their fifth anniversary, she goes missing, and it doesn’t look good for Nick. There has been animosity and tension between them, but most importantly, there have been many lies.

Neither party is innocent, but Amy’s way of making her husband notice her again is very off-kilter. Unnerving. She’s one of the most memorable and disliked heroines in a book (and now a film with Rosamund Pike and Ben Affleck) of all time!

I totally recommend this story – the way it’s written is genius. The book is almost divided into parts. The bombshell in the middle creates a whole new world of pain for Nick. Who will believe him? Not many? Who believes Amy’s diary? Everyone it seems, except Nick. And what about the ending? For me, it’s perfect.

Now I really want to watch the movie! And to read more of Gillian Flynn’s books.