In Berner Oberland, a region of the Canton of Bern in Switzerland, lies the Guinness Book of Records’ World’s Longest Staircase.

Looking back at the terminus, heading straight up. The stairs are to the left of the track 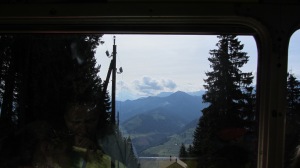 A glimpse of what’s to come

With 11,674 steps going steeply to the top of the Niesen mountain, you’d be a fool to consider a running race on them, wouldn’t you?! But on June 6, crazies of all ages will huff and puff their way up in the 14th Niesen Stairway Race. I wonder if they ever stop and have a look at the amazing view behind them? 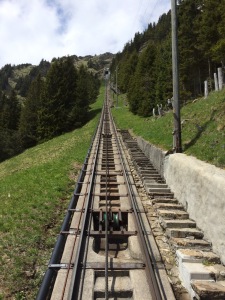 Somewhere around the middle I think

At all other times, people aren’t allowed to walk on the steps, because the funicular train goes up and down at 15-30 minute intervals – apparently it gets a bit tight in some sections. For any of my hardcore running fans, do you fancy entering in 2016? I’ll cheer you on at the start and have a cold drink waiting at the finish! 🙂

A clear view on the way down

The Niesen, also called the Swiss Pyramid because of its shape, is about a 45 minute drive south from Bern. We caught the funicular (no surprises there!) to have brunch on top today. It was Leo’s birthday present from our neighbours last year and we were shocked at how full it was! Sunday seems to be a popular day to sit and watch the clouds whiz by. It’s also popular with the paragliders who constantly fly past the viewing platforms and over the restaurant.

Below is a gallery of our photos and here’s a link to the Niesen official photos (some lovely shots in there in clearer weather).