Sandra ready for her run. Alas we weren’t running together, only in spirit!

After seeing this photo my friend Sandra sent me this morning, I was inspired to go for a run/jog/shuffle too. The weather is amazing – all the windows are open in the house to let the fresh air in, and our jackets are hanging on the clothesline getting an airing. Sandra stepped it up a notch and ran 8km, whereas I settled on my usual 4km track. Maybe when I’m fitter, we’ll go running together?

Seems like quite a few people had the same idea to enjoy the outdoors; I came across three couples and one man out for a stroll. So sweet, seeing the oldies holding hands as they walk in the sunshine. If they’d been eating ice creams on a bench together, I probably would have burst into tears (not sure why, but that gets me every time).

Unfortunately, the icy sections in the forest still haven’t melted. I felt a bit foolish tiptoeing through the dangerous parts (it must look hilarious from a distance) so ended up walking quite a lot, for fear of doing another learner-on-roller-skates impression. Pushing off with the back foot was always the slipperiest part.

View to the Alps from the front door

This wood stack on the route smelt amazing

Two of the four couples I said hello to

The Alps look amazing. Must be a beautiful day on the ski slopes

These hens were very happy to pose and say hello

The trails are still very muddy and not good for my new shoes!

It looks so harmless but was very slippery

Whereas this just looks like an accident waiting to happen

The poddy calves wanted to say hi too

And, of course, taking photos slowed me down! I found it hard to get into any kind of rhythm but still managed the 4km in 29 minutes 32 seconds. That’ll do me I say! My third fitfor15in15 run of the year. One bad thing though – as I set off, I realised not one drop of water had passed my lips this morning. I’m making up for it now, guzzling a few litres … in a ladylike manner.

Listening to all the birds and the snow melting has filled me with the joys of spring. It’s supposed to snow again tomorrow and early next week, but today, you wouldn’t believe those weather predictions could come true. Are the seasons changing where you are? I’m feeling for all my Australian friends on the north and east coasts at the moment, suffering in the cyclones. Hope the damages aren’t too bad.

And for something totally different, the sleepy capital city of Switzerland, Bern, came alive yesterday afternoon, thanks to the visiting fans from the Everton Football Club. Their team played Young Boys last night (yes, the football team from Bern is called Young Boys; so odd) in the Europa League and in order to prepare themselves for the match, thousands of fans took over the city. Drinking beer. 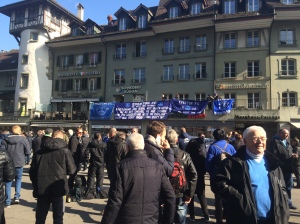 Not sure how they got up there to hang those banners, as I think it’s an office! But they did!

I was meeting my friend Pastora in our favourite bar and we ended up having a hilarious afternoon talking to some of the more refined fans from England’s north – all totally out of the ordinary and very good for the soul. (It was a sad result for Bern and a good one for Everton: 1-4.) 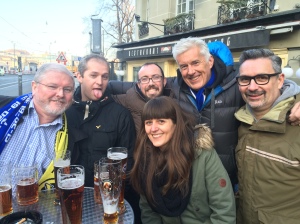 Pastora with the afternoon’s entertainment – the Everton lads!

3 thoughts on “February 20: A 4km run through the forest”