My view for the whole day

What more can I say about today? Lots of swimming in the beautiful clear water, book reading and Relaxing. We’ve been craving quality beach time for ages – Leo more so than me, because he didn’t come to Australia last year. I’m not so happy about his sunburn though! Why do men think they’re bigger than sunscreen?!

The Internet connection is stronger today, so I uploaded the photos to yesterday’s post if you fancy having a look at a few more.

Haven’t had the internet until today! It’s been quite nice being internet-less but here’s an update of the trip so far …

Sunday: Flight was great, took photos of Mt Etna out the plane window, were met by Leo’s Dad and Bossy at the airport, picked up our Fiat 500 and drove to their house in Passopisciaro, had a fabulous lunch in a nearby village, met Leo’s Aunty Elvira and had an early night.

Leo, Bossy and Tony with our hire car 🙂 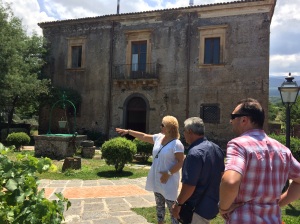 Looking around the grounds at our lunch venue

Monday: Went to the beach at Fiumefreddo for the entire day, lazing under an umbrella on lounge chairs at a private lido (beach area) with Tony and Bossy. Had pizza in Linguaglossa village at Leo’s second cousin’s restaurant with members of Leo’s dad’s family.

Spent our first full day under an umbrella at the beach

The original version of our Fiat!

Tuesday: Went to Mt Etna in the morning but didn’t go to the highest point – too expensive! Will do that next trip maybe. Cruisy afternoon driving around the region.

Driving towards the southern viewing point 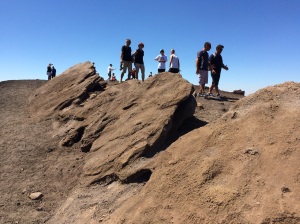 Walking around a crater

Today: Left Tony and Bossy for Gole Alcantara, a natural ravine with a cold river, and then drove on to Taormina. Had a swim and a fantastic seafood dinner. Despite the stony beaches, it’s beautiful here! 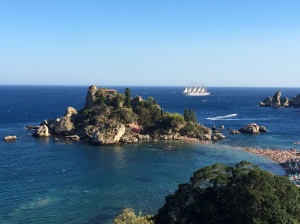 The view from our hotel room in Taormina