Two things have really stuck in my mind from our recent holiday in the Canary Islands, and they both involve the volcanic rock found everywhere.

From Corralejo, on Fuerteventura, we walked to the big beaches, or grande playas, near the extensive sand dunes on the north east of the island, and as we came around the coastline past the great holiday houses and beach bars …

They even built some houses with the volcanic rock. Normally it was a garden feature but some houses used them for walls and not just pavers 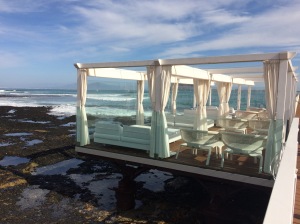 A chilled place to hang out with a drink, looking at Lobos Island 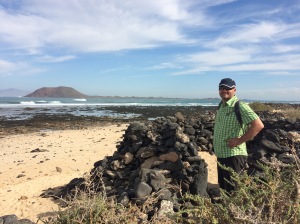 What could this round mound be?

From a distance, I could only see two, so I thought they were places to barbecue (check me out, the classic Aussie, thinking of a barbie) and smartypants Leo, who’s been here before, laughed at my stupidity. 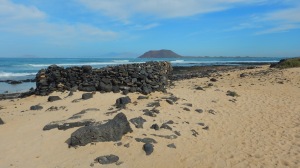 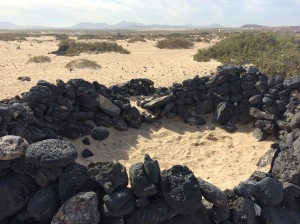 They’re for people to lie in, normally naked!, to protect themselves from the wind. And boy what a wind. It’s a windsurf/kitesurf mecca, which makes for tough conditions on the beach if you want to bare it all. 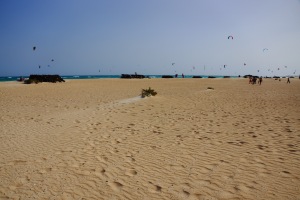 Kites all over the beach. The ones with a human attached at the bottom, going through water …

Of course, people wearing swimmers also used them, but I have to say (from the cheeky peeks I was taking as we walked past them, and there were dozens of the formations, some in better states than others) that the majority were filled with rudie nudies. I’d want to to save my bits from being whipped by the sandy wind too!

I’ll tell you all about the second weird man-made rock formation thing that I’ve never seen before tomorrow.

p.s all the good quality photos were taken by Leo. Thanks Leo!

3 thoughts on “Holiday on the rocks”