How on earth can it be 10.10pm? Not one skerrick of exercise has been done! Argghhhh!

A beautiful clear morning quickly turned into a snowfest around midday and it hasn’t stopped snowing.

Love how the icicles have formed on the garage

I was hoping to do this 14-minute pilates class tonight, with a Thera-Band. The band’s been hanging around in a drawer for years (used halfheartedly a handful of times) and it’s been staring at me since the start of fitfor15in15. But I couldn’t do the routine in the upstairs office (Leo’s downstairs watching a movie) because it’s impossible to put my arms over my head up here! The ceiling is even lower than downstairs. So I’ll save it for Monday. Maybe you might like to do it with a Thera-Band or an old pair of stockings or stretchy tights? You don’t really need the actual rubber thing. See if you like the idea of using a resistance band first before buying new equipment.

So the search continued for more 15-minute routines and far out! There’s a whole series called #fitin15 which I’ve never seen before, which is crazy because I’ve already done one of Jessica Smith’s videos. Cannot believe it – it’s like I’m not as clever as I thought I was. It’s been someone else’s mantra for years! I’ve just added the ‘for 2015’ in there.

This is the routine (I wanted something mainly on a mat!) which is video #5 in her #fitin15 program. It had some great exercises, and I feel like I’ve done something, which is the goal! It came up a bit short time-wise, so I did just over a minute of squats with the chickpea tins to complete 15 minutes.

On a totally different note … How great are these smoothies we found at the shops? With the sale of every drink with a beanie, money is raised for older people in financial trouble, to keep them warm and healthy in winter. Loving that concept, and the cuteness!

It’s like they were saying, “Pick me! Pick me!”

So many creative options 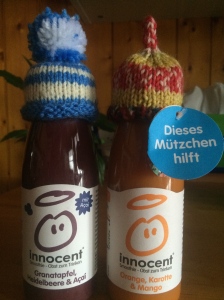 And last but not least, here are some interesting things I’ve read this week that you might enjoy too:

Can breathing properly, with focus, make us healthier?

25 things you can do with apple cider vinegar

And finally, babies reacting to going through a tunnel in the car. This is one of the best laugh-out-loud videos I’ve seen for a while. Such incredible expressions!

Wishing you a wonderful rest of the weekend.