This is the fourth guest post in a new fitfor15in15 series designed to show the pleasant impact that feeling fit, in all its forms, can have on your life. Kate Lehmann has never shied away from a challenge and she’s grabbed her newest passion with both hands, literally. Take it away Kate! 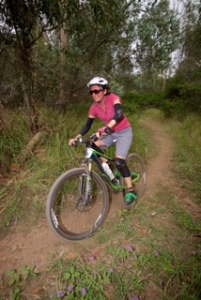 In 2003, I went from being a regular traveller who followed the usual path – finish uni, work for a bit, save enough cash to travel the world, ticking off “must see” places like the Eifel Tower, Leaning Tower of Pisa, Uncle Ho, Lenin and Mao, and an overland truck adventure in Africa – before embarking on what I can only describe as Phase Two of my life.

Good friends invited me to join them hiking the Overland Track in Tasmania for eight days. Unperturbed by this obvious challenge, I immediately said yes. One of these friends came up with the idea of testing out this “carrying a pack” thing. So we set out one rainy Saturday to walk and camp in the Royal National Park south of Sydney. We didn’t die, but we overcame a lot of challenges – spiders, soggy sandwiches, forgotten dinners, blisters and a lack of water to name a few. We learnt a little bit more about overnight hiking and, more importantly, how a heavy pack can be carried.

The Overland Track is one of the great walks in Australia, and the world, and I couldn’t wait to get there. I spent more time preparing the food for this trip too and thankfully didn’t go hungry again. We set off the week after a record snow dump, so day one was a detour and involved climbing over Hanson’s Peak using chains and carrying a pack that can only be described as looking like a Christmas tree, I had so many things hanging off it. Borrowed gear, a “traveller” pack (the zippered kind), a big puffy fleece and eight days of food just would not fit in. 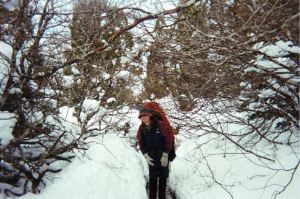 With her Christmas tree pack, on the Overland Trail in 2003

That first day wasn’t even the hard one. Stumbling over and through thigh-deep snow for eight hours on day two made me realise that I was the only one who could get me to the hut. There were no cars, no respite-giving kiosks or helicopters – only my determination would get me there. So, suck up the pain and the exhaustion and keep moving, or lie down and die.

Later, much later, I realised how lucky I was to have that experience. Hiking is not a race. It’s set a pace, have the equipment for an emergency, and focus on getting from A to B. Take your time, smell the roses, enjoy the scenery and if in Tassie, keep your eyes out for tiger snakes, leeches and attack wombats. Despite these challenges, a passion for this overnight hiking gig was born.

I got back to Brisbane and booked and walked the Kokoda Track six months later in 2004. By then I was well and truly hooked. After that, I enjoyed multiple trips to Tassie, checking out such wonderful wilderness areas as Frenchmans Cap, Walls of Jerusalem, Western Arthurs, Mt Anne and Maria Island. How good was this walking gig? A lot of preparation in the weeks before goes into your happiness on the trail, but once all the organising is done, just eat what you brought (pack as much chocolate as possible) and relax and unwind from the pressures and stresses of life.

I consider myself lucky to have such great friends who suggested that first hike and we’ve shared the love of adventure and the great outdoors on many others. People say we’re lucky to have seen so many great places. Not lucky, just making our own luck and grasping a hold of opportunities when they arise. Opportunity sometimes only knocks once, so don’t miss out. Great experiences don’t come without a willingness to get out there and just do it. Have enough determination and it can be done. You meet all sorts of people out there under the stars – old, young, the fit and the slow plodder. You have the time to chat and play cards and write in a diary. Reading it back is like doing the trip all over again … without the dirt slowly accumulating under your fingernails.

After learning the ropes from good friends and mentors, I convinced my sister that she, too, could carry one of these heavy pack things and we’ve had many an excellent holiday together. I’m not allowed to take her to Tasmania to hike – too many leeches – so we’ve stuck to the more coastal areas of mainland Australia.

Our first hike was the Great Ocean Walk. We “double-hutted” the first day to break her into this hiking business quickly. She also learnt heaps, like eating tuna on pita bread for lunch will repeat on you all afternoon (tuna never came on another hike). I also learnt that you should buy a good map and not rely on the free promo one that came in the National Geographic magazine that was, for the most part, WRONG! Thinking you’re nearly there and four hours later still walking is not good for the spirit.

The sisters on their first adventure together, along the Victorian coast in Australia

Trips to New Zealand (no leeches there) to walk the Routeburn, Milford, Kepler and Humpridge Tracks followed, then a week in the Snowy Mountains in April (it’s a hiking playground up there) and Wilsons Prom – where we nearly packed it in a day early after seeing a massive big brown snake … and a leech!!! Not sure which was worse. After convincing my sister to stay, she then ate all the M&Ms out of my trail mix … slowly … and in front of me.

Our favorite track is Bibbulmun Track in Western Australia. It’s 1000km and we’ve done half of it, going over twice for two hikes of over 10 days. Occasionally you walk through a town, so you really get the time to relax and unwind from work. Combine the stunning scenery with meeting such interesting people along the way and you have a most excellent holiday. Also, for anyone who has a sister you will know they can be very honest – you laugh, you cry and you tell each other off, get on with it and then laugh again.

I no longer have a pack that looks like a Christmas tree. I’ve slowly upgraded my gear and fortunately it no longer weighs a tonne. If you’re not hiking, then looking for and buying hiking gear is almost as much fun. I thought for the rest of my days, as long as I was fit enough, hiking holidays were for me.

That was until 2012 when those same old friends suggested we try something different … “Do you want to cycle from Lhasa to Kathmandu this year?” Of course I said yes. The fact I owned a knockabout bike that only went on the odd bike track didn’t worry me at all. And here began Phase Three …

The tour we booked had a questionnaire where you outlined how much exercise/training you did each week. Um, tap dancing one night a week and doing the odd hike up Mt Coot-tha, in Brisbane, on the weekend didn’t seem to cut it with their “suggested training schedule”.

I also needed a proper bike and had no idea what they were talking about in the shops. “29er, 26er, hard tail, dually.” What were all these words?? I just wanted a bike that would allow me to ride up mountain passes over 5000 metres and tackle some dreadful road conditions in Nepal. I ended up with a 29er Hard Tail and immediately fell in love with it … until I couldn’t clip out and nearly went splat on the bitumen on my first ride. I clearly had a lot to learn.

The trip was great, but since I’ve been back it’s been even greater. Meeting a handsome fella on the tracks of Brisbane’s Gap Creek has also been great. Now my weekends are full of rides and single-track adventures. I’ve also done a lot of fun cross-country racing on the mountain bike. The competitions have different grades, so even if you are new like me you still have fun and occasionally get up on the podium.

Combine all that hiking gear I have in the cupboard with the bike and you have “hikling” adventures. Pop a pannier on the back of your bike and you can go further and still camp under the stars. I still go hiking – it’s a different pace altogether – but, for me, being on the bike is loads more fun. There are so many more places you can visit with a bike. Now, if only work didn’t get in the way so much! How do you win lotto?

Update: Kate enjoyed her first blogging experience so much she now has her own site, showcasing her hiking and cycling adventures around the world. Read more at www.theoutdoordiaries.com. Great work, Kate!