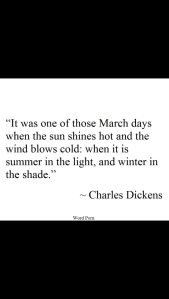 Sums up today perfectly. Thanks Charles.

Very happy to not pull up too sore after yesterday’s walk into Bern. Iva called me out on the time it took – we were underway for six hours, but I didn’t count the three pauses, so she’s right. We walked from 9am-3pm (but only five hours of that was actual walking).

My arms were sore last night from The 7-Minute Workout which was a nice surprise. There were a few sets of push ups and planks which really did the job.

Today was a busy day but at the end I only had time for 15 minutes of various exercises with the chickpea tins. I did manage to do several hours worth of gardening around our house though, preparing the soil for future plants. Cleaned up lots of leaves as well, and finally (finally!) changed the kitchen window/entrance decoration.

Before the clean up …

… and after. Much better. My favourite succulent died off a lot but it was great to see new greenery

Yes, I’m one of those who leave the Christmas decorations up for too long. It looks so bare without anything, and the neighbours gave me two figurine sheep for my birthday, with Leo and Ange very neatly written on their bellies, so I had something to go in the space at last. I found some pussy willow in a pile of branch offcuts on the walk home from the bus yesterday, so pilfered them for the window too. When I was little, I used to stick the soft buds onto cards and draw tails on them so they became mice. Nice childhood memories. I’ve also added a small vase of them on my desk. 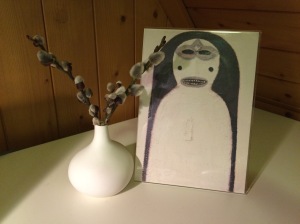 I’ve forgotten a thousand other things to write, but it’s late, so they’ll have to wait ’til tomorrow.