Four years ago today, I walked 29km in Spain with a stranger.

The previous day, I could hardly walk. My feet were blistered and my legs were tired, after six days walking 135km on the Camino Frances from St Jean Pied de Port to Los Arcos. At the hostel, after I’d showered and tended to my feet, this stranger commented on my slow, heavy gait. “Do you always walk like a duck?” he asked in accented English. “No” I replied and strode past, muttering obscenities under my breath. What a nerve!

The next morning, the morning of June 14, I set off early thanks to five snoring Hungarians who’d been up well before dawn. I walked alone, and turned to take a photo of the sunrise over Los Arcos. And there he was, walking towards me. “Oh great,” I thought, “here comes The Duck Guy.”

We fell into step and walked together – me trying to be pleasant to this Italian born, Swiss raised bloke called Leonardo, while cursing my blisters and sore legs with each metre. Yes, I was walking very slowly, and still like a duck, but I wasn’t going to forgive him in a hurry for that comment!

Leo, on our first day walking together. It was my seventh day on the Camino, hence him holding up seven fingers. I took many photos of walkers representing each day

After a few hours, talking about music and movies, we met an American-German woman named Simone and the three of us walked for a while before taking shelter from the midday heat in a tunnel with a South African actress, a young German guy, and one of my original Spanish walking friends, who I’d met on day one.

When we checked into the hostel, we were assigned beds, with Leonardo’s being above mine. I wasn’t sure what to think by this stage – he had been really nice on the walk, and a part of me wished it had been just us walking together all day. But I was on this “long walk with a small backpack” adventure alone and meeting someone wasn’t part of the plan. Especially someone who lived in Europe.

After an afternoon relaxing, including Leo washing some of my clothes while I had a beer with Simone (!!), it was time to sleep. While getting settled, I noticed his arm hanging from the bunk bed. His hand was right in my line of vision. Was he trying to say something? Or was he just asleep? I looked at his hand for a very long time, and eventually summed up the courage to take it in mine. He gave a warm squeeze, as a kind of ‘hello, thank you for a good day and good night’, and that, as they say, was it.

We were together for the next 24 days, walking to Santiago de Compostela. You get to know someone very well spending 24 hours a day with each other, walking and talking. We had no commitments (work, family, social and so on) to distract us. It was an intense month and at the end we had to make a big decision.

I stayed in Spain and walked to Finisterre, Leo stuck with his original flight and flew home to Switzerland, and 11 days later he met me in Barcelona. We spent four days there, then I flew with him to Switzerland for three days, to visit the little gingerbread house where he lived and to learn more about his life. We said a sad goodbye and I returned to Barcelona to continue the final few weeks of my European adventure. 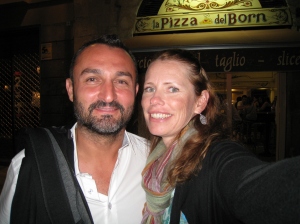 Fast forward to November 25, 2011 – Leo flew to Australia to meet my family, and December 5 we arrived in Switzerland to begin our life together. It’s amazing how things work out. I had no intention of meeting someone while I was on the walk, and that’s exactly what happened. Sometimes you just have to go with it and I’m very glad we’ve had the courage to ‘give it a go’.

Happy fourth anniversary, Leo, you cheeky monkey! Imagine if you’d never made that duck comment? Imagine if I’d not walked with you that day? It’s amazing how life can instantly change for the better.

(And, yes – for the record – even without the blisters, I still walk like a duck.)

Join 87 other followers
Follow fitfor15in15 … and further on WordPress.com