The new bike, known in Switzerland as a Töffli (which I spelled incorrectly yesterday), proved to be a worthy stallion this morning and afternoon.

It takes 30 minutes to ride to work, which shaves 20 minutes off my commute time. I park at the top of those mega-steep steps, so I still get a bit of a workout. Maybe I should make a new goal to be able to run up those steps non-stop (at the moment, walking them without stopping would be a win!).

The wind was cool, the light was gloomy but the Alps were visible through the clouds, the seat was comfortable, the fumes weren’t too overwhelming and I just loved the buzz and hum of the straining engine.

Leo is slightly amused by my excitement over something that 14-year-old kids are allowed to ride to school. We also think there’s a rule here, that if you’ve lost your driver’s licence, you can still ride a Töffli. So maybe people will see me and think I’m a teenager, or a lawbreaker. I’m fine with either.

On the way home, I stopped at the shops, because I can do that now 🙂 and bought two plants to fill some holes in my garden layout, and some laundry liquid. They all fit wonderfully in that fetching plastic green basket on the back. If you missed it yesterday, here’s another angle 🙂 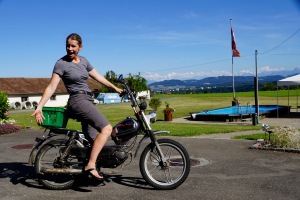 I’m also particularly fond of the muffler rust, as you can tell

I overtook a few bicycles and was overtaken by everything else. There’s a long slow hill on the way into town, where I felt like running beside the bike to help with the speed, and on the way home, I was worried about the motor blowing up. S/he was flying down the hill!

Which brings me to my reader request. I think the bike needs a name. I’m quite partial to Bruce, because it’s old-fashioned and reliable. Very apt.

Do you have any suggestions for this gallant steed? Should it be male or female? I’m open to all suggestions. The bike make/brand is Alpina, s/he was born in 1983.

It’s been a day of good fortune today. This afternoon we discovered a loop hole in an electronics company’s advertisement. It said you could take all your working Apple smartphones and tablets back to them to recycle and you would receive money towards ‘Apple products’. What the advert failed to clearly state was it had to be another Apple smartphone or tablet, as if you were doing an upgrade.

So with a little bit of hassle we managed to make our point that even though one part of the ad said swap old for new, it didn’t actually say the new had to be a phone or tablet. Just an Apple product. I’m now the proud owner of a new wireless computer mouse, a green iPod Nano to carry when running (it has a workout app as well) and a CHF50 iTunes voucher. All for the grand sum of CHF16.

What’s also brilliant is we have now Kondo’d our electronics! We took in two iPhone3s (neither worked so we didn’t get any money), an iPhone4, my dead iPhone5 from earlier in the year (again, no money) and my old iPad. I have been wanting to get rid of those electronics and all the associated cables for a very long time. Clean drawer! Relief!

On that note, it’s time for bed. Tomorrow I’ll take photos of the two new plants – forgot to do that – as my 30-Day Challenge (which is sporadic at best!) continues.

I look forward to reading your bike name suggestions! 🙂