I’m typing this again, because, for some reason, my original post went missing! Arrggghhhh! Not what you need at 11pm!

Didn’t fall asleep on the couch this afternoon, because I didn’t sit on it!

Came home from work, put on my daggy clothes and helped Rene in the garden. The two new front wheels for the lawnmower arrived last week, but the weather’s been terrible so no chance until today to put them to the test. Many trips to the compost were made, because the grass hadn’t been cut for two weeks (since I broke the front wheel).

After whipper-snippering around the edges, I finished off the mowing. Then I weeded around the garage (damn nettles!), dead-headed Liliane’s roses and the pots around the pool, and then I thought I’d have a rest. Sat on the terrace for two minutes and saw a plant which I really don’t like the look of, and never have, so I pulled it out. Then I had to give the soil a bit of a scratch to patch up the hole, then I thought I ‘mose well weed that garden bed too. Oh and why not my main garden bed as well, while I’m in the swing of things?! All up today, three hours in the garden and one hour of walking. Not too shabby.

I managed to snap a few pictures in Bern’s Botanical Gardens. After yesterday’s 30-Day Challenge plant name, my eye was drawn to another Allium strain, Allium fistulosum. In German it’s common name is Winterzwiebel, or winter onion. In English, it’s the Welsh onion. I thought the stems would smell oniony, but nothing. 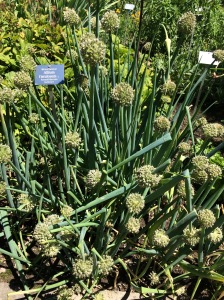 Even though I really didn’t feel like it, I cooked another I Quit Sugar 8-Week Program dinner and finally flopped on the couch for two episodes of House of Cards. Didn’t eat a sweet thing all day! After 2.5 weeks of much less sugar than normal, I’m finding it easier and easier. The natural yoghurt for breakfast seems sweet enough. Never thought I’d say that! Berliner doughnuts were on special today in the supermarket – six for the price of four – and I walked straight past (while shooting daggers at the man who grabbed a packet so nonchalantly!)

All up, a nice mixed bag of goodies today. I hope you achieved too. And as always …