Not only is it Monday Runday, it’s also Star Wars Day … May the 4th be with you.

The fourth, I mean force, was strong today on my 5km run. Apart from stopping to take the odd photo and having to walk 200m to get rid of a stitch (again!), I felt really good and was happy with my time. I think I’m so worried about being dehydrated and getting that weird pain in my ears, I overcompensate and drink too much water before I head out. 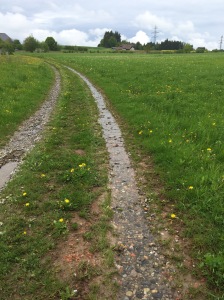 At the beginning of the run, one of these tracks was a little creek 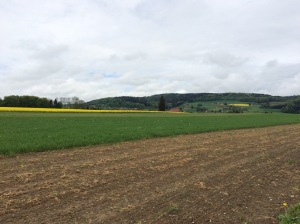 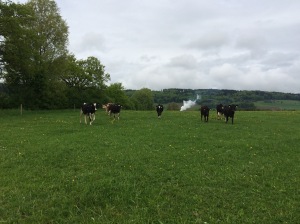 These calves looked so cute, I had to stop for a photo 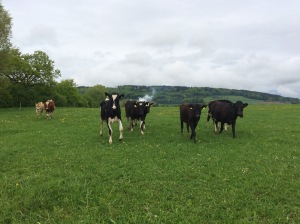 So sweet – they ran over to say hello! 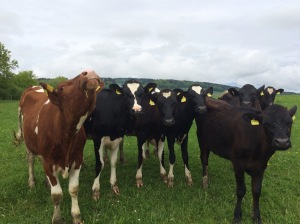 Maybe I smelt good, but I doubt it 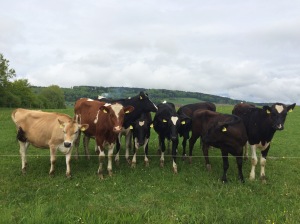 In the end, they all lined up for their 15 minutes of fame 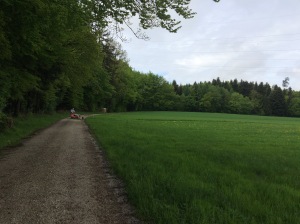 Saw a man using a strange machine in the fields, and waved … and maybe ran a little harder! Such a dag 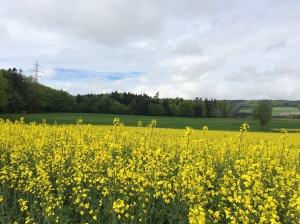 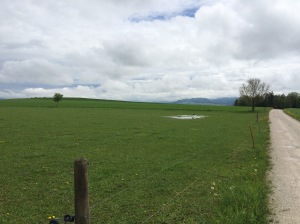 I startled this heron (?) in the puddle and it flew off majestically

I had thought about taking a longer route, but then chickened out at the last minute. Probably a good thing, as it was really humid (no wind too) and I ended up having to shed top layers and run in my tank top – first time that’s ever happened in Switzerland!

As part of my cool-down, I walked back to the tulip field (I measured it as 550m from our house) but the ducks from yesterday were gone. I bought a bunch of solid hot pink flowers as consolation. 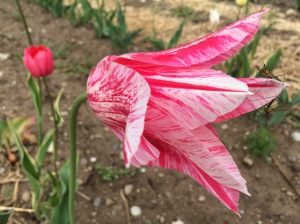 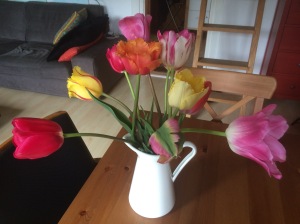 The bunch from yesterday, downstairs 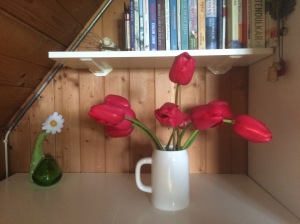 The new bunch from today, upstairs

The tulips aren’t going to be around for much longer – I’m almost tempted to collect a bunch of beautiful white ones, with pointy tips, tomorrow!

This morning was rainy and pretty miserable, so while waiting for a break in the weather, I mended the split in the backside of my apple-green cotton trousers. Initially I thought my pants would only be good enough for garden work afterwards, but I think I did such a good job, and the thread matched so well, I can wear them out again. (Can’t believe (and am very thankful) a hotel sewing kit carried that colour!) Then again, I may have been without my glasses when looking in the mirror … And after taking this photo, I’m now having second thoughts. I’ll wear a long top. 🙂 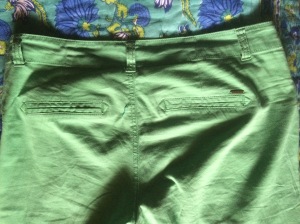 Maybe my mending effort wasn’t so invisible after all …

All this rain has made our next holiday plans a bit sketchy – from next weekend, we’re planning to walk the first third of the Swiss Camino, from Constance to Einsiedeln. It should take about five to six days of walking, and is only 93km long, but if it’s going to be too wet, maybe we’ll have to rethink our plans. We walked the second (middle) section from Einsiedeln to Thun in 2012 and hopefully we’ll complete the third and final stage from Thun to Geneva before too long.

Have you been out wandering in your neighbourhood recently? I’d love to hear about what you see when you go walking or running.

2 thoughts on “May 4: The force was strong on Monday Runday”