A hilarious, if not a bit scary, end to a great night last night at the Sonisphere concert in Biel.

We survived the heat and looming storm clouds to see The Hives and then (after a break for a band we didn’t like) the main act, my favourite band, Muse, hit the stage. We had good positions for both performances, in a sea of 35,000 people.

The Hives – getting hives in the heat!

Some idiots in the crowd 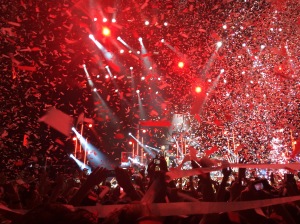 Towards the end of the Muse show. They’re on stage in there somewhere

Both bands were great fun – the poor Hives played in the hottest part of the afternoon and were constantly dousing themselves in bottles of water on a hot, black stage, and Muse played a lot of songs from their new album which I haven’t heard yet. They were all great.

We rode the Vespa (40 minutes there), wearing shorts, sneakers and our bike jackets. We had cool, long sleeve, loose tops for the concert – I’m still amazed how people who wear practically nothing can cope with slathers of sunscreen (or none at all) and the inevitable (slight) sunburn that comes. And no hats! Put a hat on it!

Anyway, as the afternoon progressed, the storm clouds gathered. Leo and Pastora sent a photo of their balcony, damaged from the high winds, and wondered if we were ok as it was heading our way. Luckily, we had no rain and could just see plenty of lightning in the distance. Straight after the last song, we headed home.

The great thing about taking the bike is you can park close to the stadium, so we were underway quite quickly. I didn’t do up the top part of my jacket, which protects my neck with another zippered layer, so I could feel the breeze. It was great setting off, seeing the cloud formations, riding through small villages, in relative darkness except for the lightning flashes, and feeling pretty content on such a rare, balmy night.

Well, then! Whaddyaknow! The ride (but luckily not us) went belly up! A third of the way home, it started to rain. Really rain. A deluge. And then, it started to hail. A deluge of hail. The wind was blowing the bike all over the place and water was seeping into my jacket around my neck, so I hunched down behind Leo. Poor thing, he was getting battered, and with no windscreen wiper it was amazing he could see. People in the cars behind us must have been shaking their heads in disbelief. I know we were!

The hail was small but sharp and pinged our faces and bare legs. We were totally saturated when we got home at midnight. I took photos of my legs with all the bright red ‘ding’ marks from the hail, but I forgot to shave my legs before the concert, so decided you can just imagine it instead!

It was the first time either of us had been on a bike in such a downpour, and I was very grateful to Leo for getting us home. Another experience ticked off the list (not that I have a list, nor would that have been on it).

Today was a mental fitness day. I hung in the hammock (with a rug to keep off the cool breeze) and finally finished As You Wish, the audio book from actor Cary Elwes about his experiences working on the movie The Princess Bride. Will write a review tomorrow.

I admired the glistening pool, a chilly 18 degrees Celsius, then prepared some food for the I Quit Sugar program, which starts tomorrow – quinoa, for dinners, and toasted muesli, which tastes pretty darn good!

We watched the Swiss Cup football final between Basel and winners Sion and then bits and pieces of the French Open men’s singles final. STAN, the MAN, from SwitzerLAN(d), won his second GRAN(d) SLAM, beating Novak Djokovic in four sets. Even Roger was watching!

And now, as the next electrical storm rolls through the neighbourhood, I’ve made the ridiculously late discovery of how nice it is to write at my desk, with the office door open onto the balcony with the geraniums, feeling the breeze and smelling the rain. (Just got to make a screen door to keep the insects out!)

The view from my desk, with Bellamy, the stuffed guinea pig, sneaking a peek

And now that the rain has stopped, the birds are going crazy as the sun sets.

Peaceful and noisy, all at the same time

I remember African violets growing on my grandmother’s window sill in Brisbane (well, I think I do?!) and the Latin name is Saintpaulia ionantha.

Liliane, our neighbour, has a lovely patch of these Hardy Garden Pinks (Dianthus gratianopolitanus, which are almost red) in her front garden. I might steal some for next year!

She also has a herbaceous pink peony (Paeonia lactiflora, seen middle, far right, near the driveway in the above picture) which smells divine. I took a fading bloom for the kitchen because it was too sad to see it hanging near the ground, still with so much smell to give. I’m not sure of its variety.

2 thoughts on “June 7: Stormy night and a cool, calm day”

Join 87 other followers
Follow fitfor15in15 … and further on WordPress.com