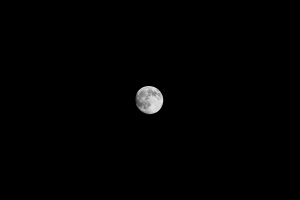 … the moon tonight. It will be a full moon in two days

Leo took this shot of the moon. I hope the skies are as clear on Thursday when it’s full. Loves me a good fullmaaaaoooooooon, I does! 🙂

Will keep this post short today. It was wonderfully warm and sunny, unfortunately a bit too hot for the work Pastora and I did – counting all the karate clothes and moving boxes and things while making the inventory. I rode straight home and jumped in the pool.

Still feel like a kid at Christmas on the bike, even if I was overtaken by an electric bicycle on the flat. (I keep telling myself the man had longer legs than me.) My niece suggested the bike should be named Brad, but I already have a Brad in my life and I’m well and truly over him. So far Bruce is still the leader (not hard seeing as Brad was the only suggestion!).

One of the two new plants, which I promised to mention today, has me stumped. The Celosia venezuela was easy to find because of its magenta prongs, but the second has me baffled. It’s quite tall and could possibly be another Campanula variety? The flowers are a beautiful blue and have very obvious petals. Any takers?

And do you think this is another Campanula variety?

Can’t believe half the year has gone! How would you rate the first half of this year? I’m pretty happy with how it’s gone so far and hope you are too (and hopefully I’ll be struck by ‘exercise lightning’ tomorrow and be back on the bandwagon for the next six months!).

What will I do on December 31? I can’t very well keep a blog titled fitfor15in15 when it’s no longer 2015, can I?! Should have thought about that a bit harder.

I haven’t mentioned the I Quit Sugar program for a few days because I find it boring talking about food, but it’s going well (not perfect) and I’m really watching what goes in. As hot as it was today, I resisted the temptation for ice cream! That’s a win.